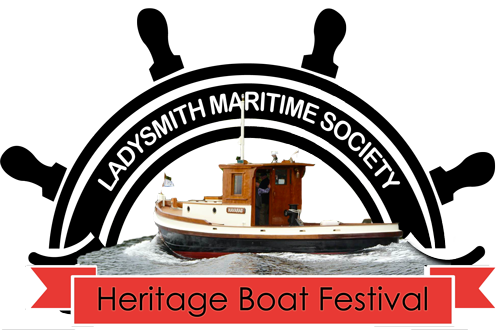 The Ladysmith Heritage Boat Festival kicks off on Wednesday July 7th, 2021, with a series of 10 videos showcasing various makes and styles of heritage wooden boats, along with interviews, history and restoration stories from the Captains and Owners. Viewers can enjoy watching and learning about the progression of restoring, maintaining, and operating these magnificent vessels from the Ladysmith Maritime Society’s heritage fleet.

Please join us for the LMS Heritage Boat Parade & Festival at the Community Marina on Sunday July 11, 2021. Our event begins with the heritage boat parade motoring towards Transfer Beach Park for viewing starting at 10:30 am. Locals and visitors will have the pleasure of seeing these magnificent, restored boats pass by with an announcer describing the history of each.

Afterwards everyone will be invited to view the fleet on the docks at the LMS Community Marina from 12 noon to 4:00 pm. The Ladysmith & District Historical Society recently awarded the LMS with “long time dedication to the restoration of heritage vessels of local importance, most recent projects including the JOAN and the C.A. KIRKEGAARD”. These beautiful and well-maintained vessels, along with others, are prime examples of our maritime history on the west coast and will be on display.

Enjoy lunch at the Oyster Bay Café along with music, art, dance and drumming on the dock from 12 noon to 4:00 pm.

Join us to celebrate our Maritime Heritage!

Brought to you by the Ladysmith Maritime Society 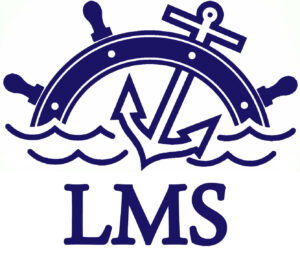 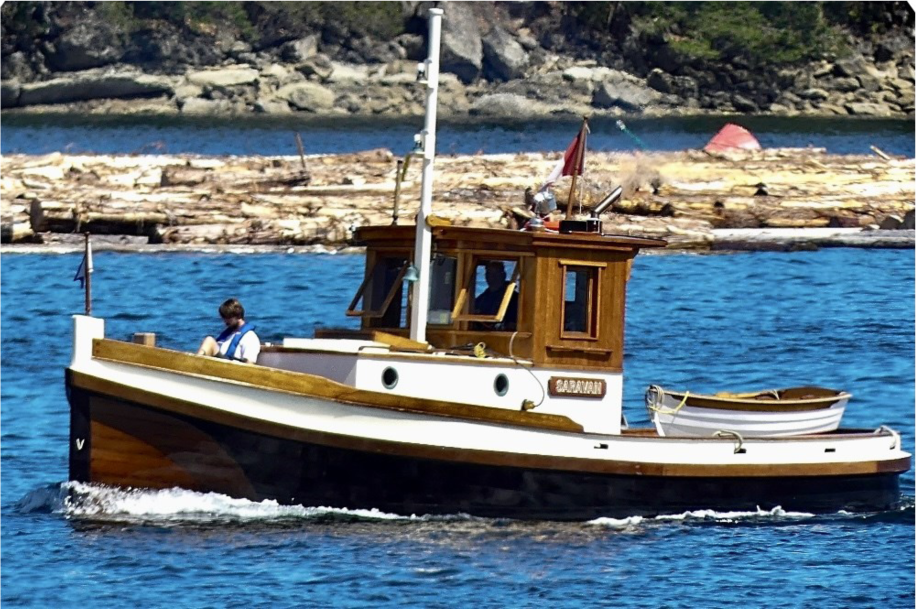 The Saravan is the flagship vessel of the Ladysmith Maritime Society. She was built in 1938 in Coal Harbour and worked out of Victoria. Pressed into service for the Royal Canadian Navy through the war years, in 1948 she was purchased and subsequently operated for 30 years by Chemainus Towing. Ladysmith resident Ken Mulholland donated the Saravan to the Maritime Society and LMS volunteers, led by a professional shipwright, rebuilt the entire stern and half the back deck plus numerous hull planks using old growth fir. The Saravan now plays an active Ambassador role for LMS and the Town of Ladysmith travelling to many classic boat shows from Vancouver to Victoria and as far as Port Townsend. Her wooden lapstrake skiff named Marilyn was donated by Georgia Paterson of Creston, BC, specifically for the Saravan as it fits neatly on her after deck. The skiff was built in the early 80’s by Robert Lally, a shipwright and surveyor.

Special thanks to Rod McNeil, Boat Steward for sharing his stories. 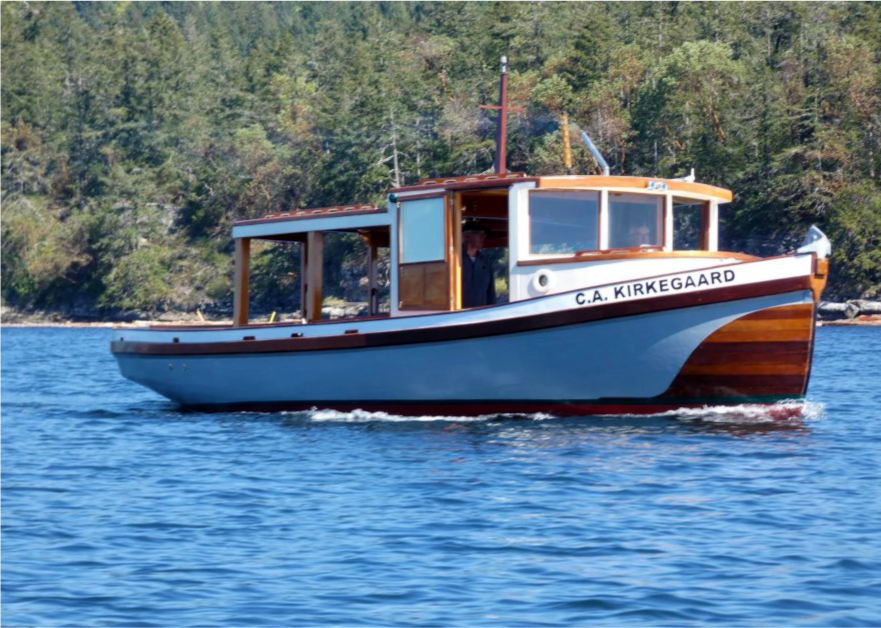 The C.A. Kirkegaard was built in 1947 by Clark Brothers Boat Works in Brentwood Bay. She was designed as a passenger boat for Canadian Explosives Limited (later CIL) , who used her to transport workers from the Saanich Peninsula to their explosives factory on James Island. The “Kirk” was owned by CIL until 1982, and from 1983 to 1988 she was used by several owners as a ferry to Sidney Island and for whale watching in Johnstone Straits. She was eventually abandoned on Hanson Island. The ‘Kirk” was acquired by Ladysmith Maritime Society in 1992 and re-launched in 1993 after a significant restoration. She was used for harbor tours up till 2016 when she was moved onshore for repairs. This time, there were many planks, ribs and timbers to be replaced due to wood rot. All of the stern timbers, including the horn timber, were removed due to rot. The restoration was completed in 2021 by LMS volunteers under the supervision of a shipwright with an estimated volunteer commitment of 10,000 hours.

Special thanks to John Beames, Boat Steward, Jeff Reichert and Robert Lawson for sharing their stories. 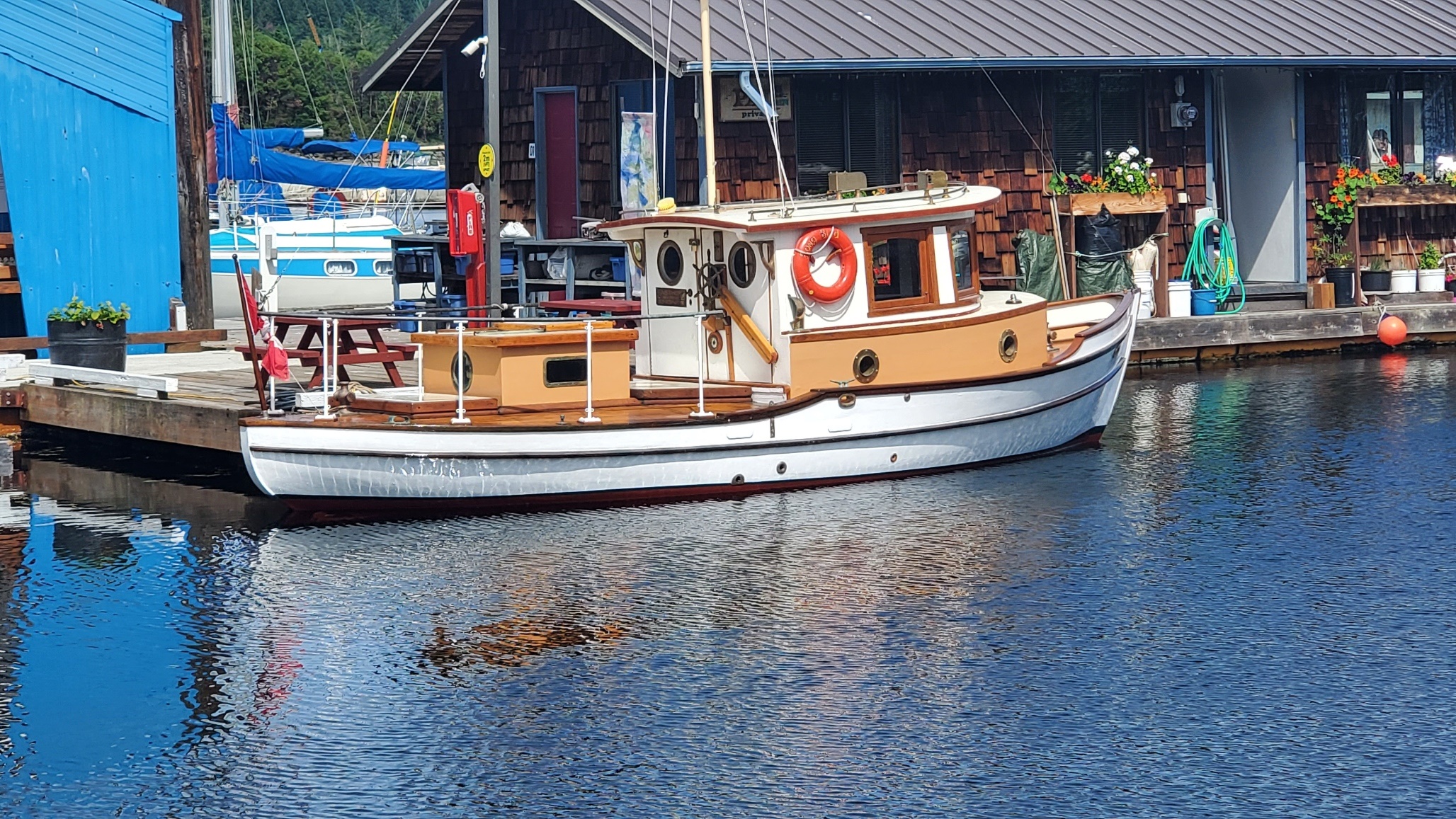 Built in Nanaimo in 1950 as a 23’ Columbia River style fishing boat, Song Bird is double ended with an enclosed wheelhouse, she originally had a fish well behind the wheelhouse and a working well at the stern. The boat still has the original “two lunger” Easthope Engine installed and operating, the first production model with electric start. After ten years of commercial fishing, Song Bird was laid up in a barn in Porpoise Bay from 1960 to 1980. The engine lay outside, exposed to the elements until purchased, refitted and displayed at EXPO ’86. In the years following, Chuck Davison acquired the boat and completed major restoration work in 2008 - 2009. In January 2016 Sydney Johnston and Angele Demers acquired Song Bird and kept her at their marina on South Dyke Road in New Westminster. Song Bird cruised for many years on the Pacific North-west coast and as far as Princess Louisa Inlet, until Angele donated her to LMS in 2020, shortly before she passed away.

Special thanks to Robert Lawson, Boat Steward for sharing his stories. 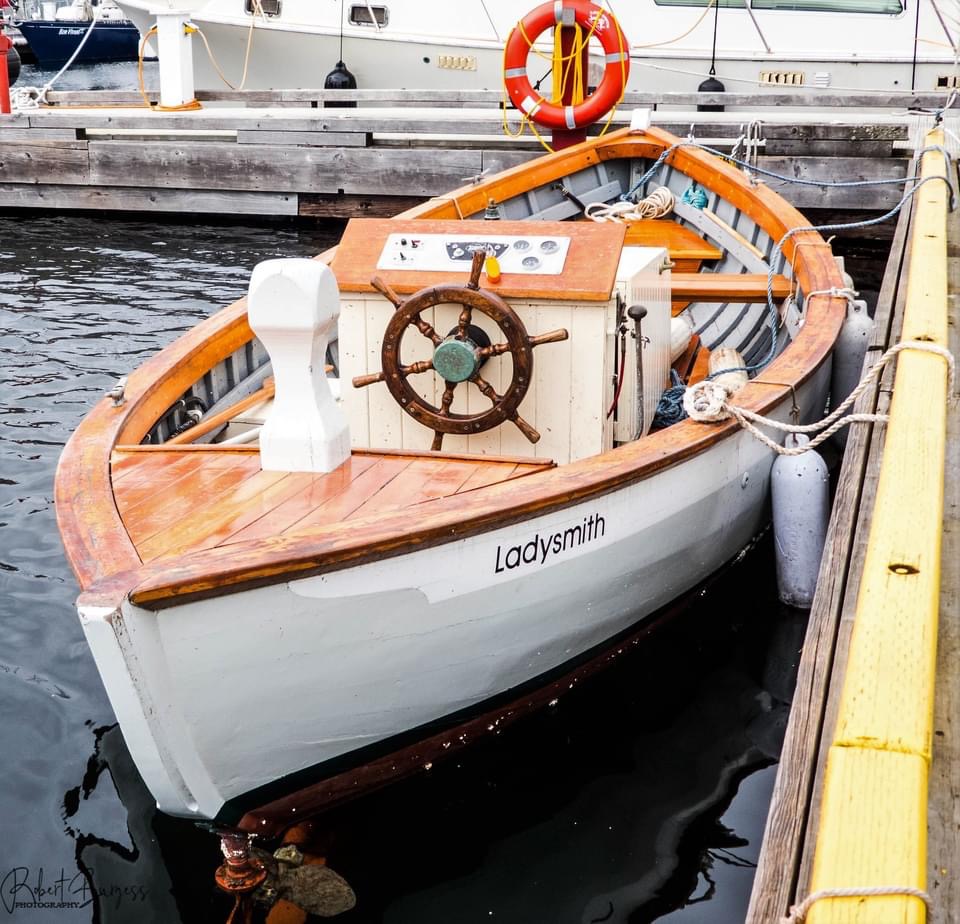 The Sudbury Work Boat was used on the legendary Sudbury Tugboat. The Work Boat was acquired by Ladysmith Maritime Society and restored to working condition, she is probably one of the few remaining artifacts from the Sudbury Tugboat.
The Sudbury was a navy Corvette used for escort work during World War II Battle of the Atlantic. She was purchased in 1954 by Harold Elworthy of Island Tug and Barge of Victoria, BC. He equipped the Sudbury as a deep-sea salvage vessel, known to be the largest and most powerful tug and salvage vessel on the Pacific Coast at the time.
The workboat was donated to LMS at some point around 2000. LMS volunteers stripped the boat to it’s open form and re-placed the keel, horn timber, stem and stern, some ribs and garboard planks. They also repowered her with a Volvo MD1B diesel engine.

Special thanks to Tim Hornett, Boat Steward for sharing his stories. 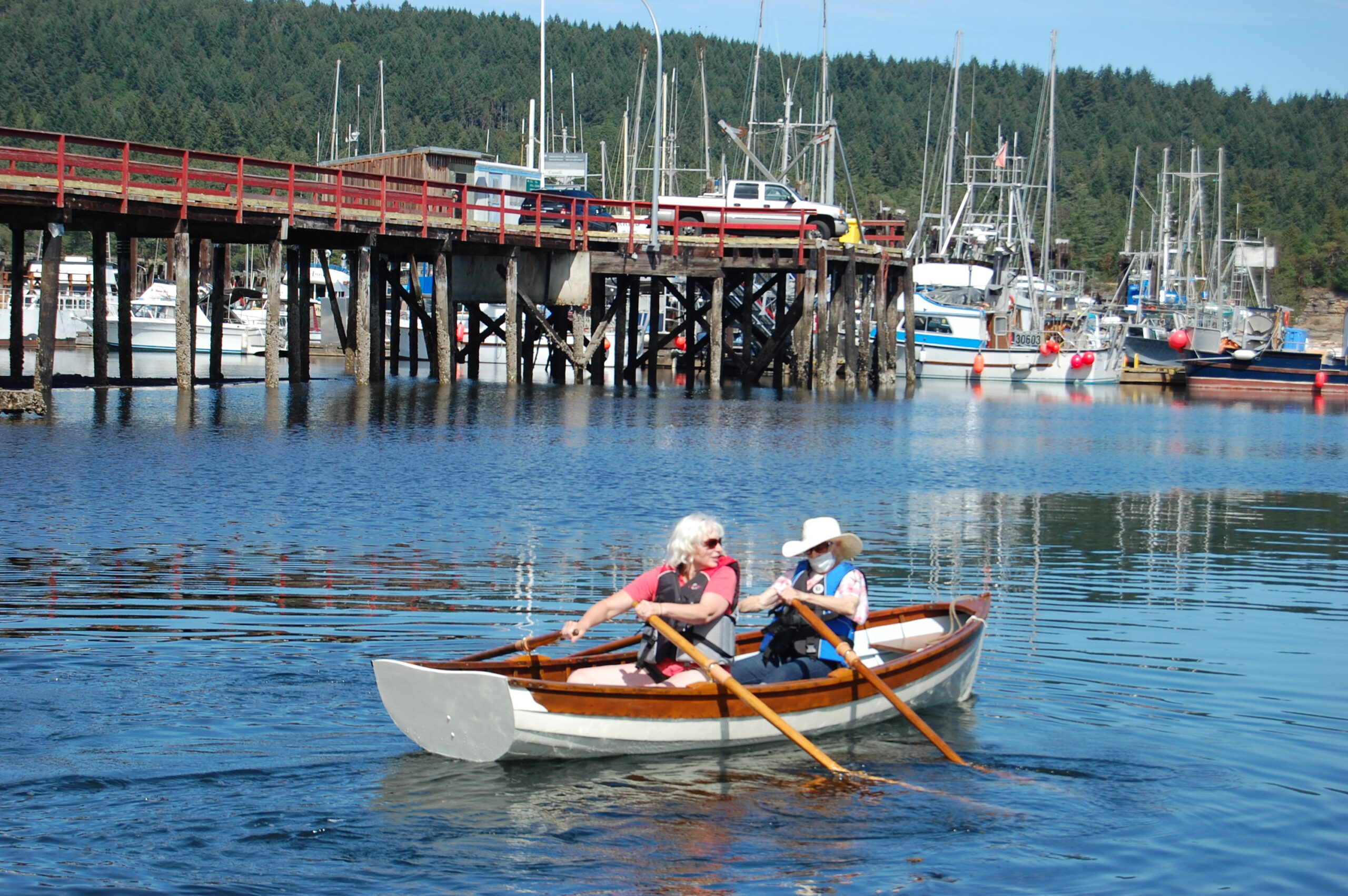 The Joan was built in 1945 by William Robert Lake. She was built in his boat yard, W.R. Lake and Son, situated at the mouth of the Millstream River in the Nanaimo Harbour. William learned his boat building skills in England on the Norfolk Broads. The Joan, a 12’ clinker-built rowboat, was a gift to his granddaughter, Joan Keel, nee Lake, after the death of her father, Wilfred Lake. Wilfred, who was also a boat builder, was William’s only child. The Joan was part of the Keel family ever since, taking them fishing around Neck Point on summer evenings. The W.R. Lake and Son boat yard was part of the Nanaimo Harbor scene from the early 1930s until the mid-1950s. They produced many lovely rowboats and a 32’ yacht, Quandary, which was the flagship of the Nanaimo Yacht Club.
LMS volunteers restored the Joan from 2018 to 2020.

Special thanks to Joan and Jason Keel and the LMS Restoration Volunteers for sharing their stories. 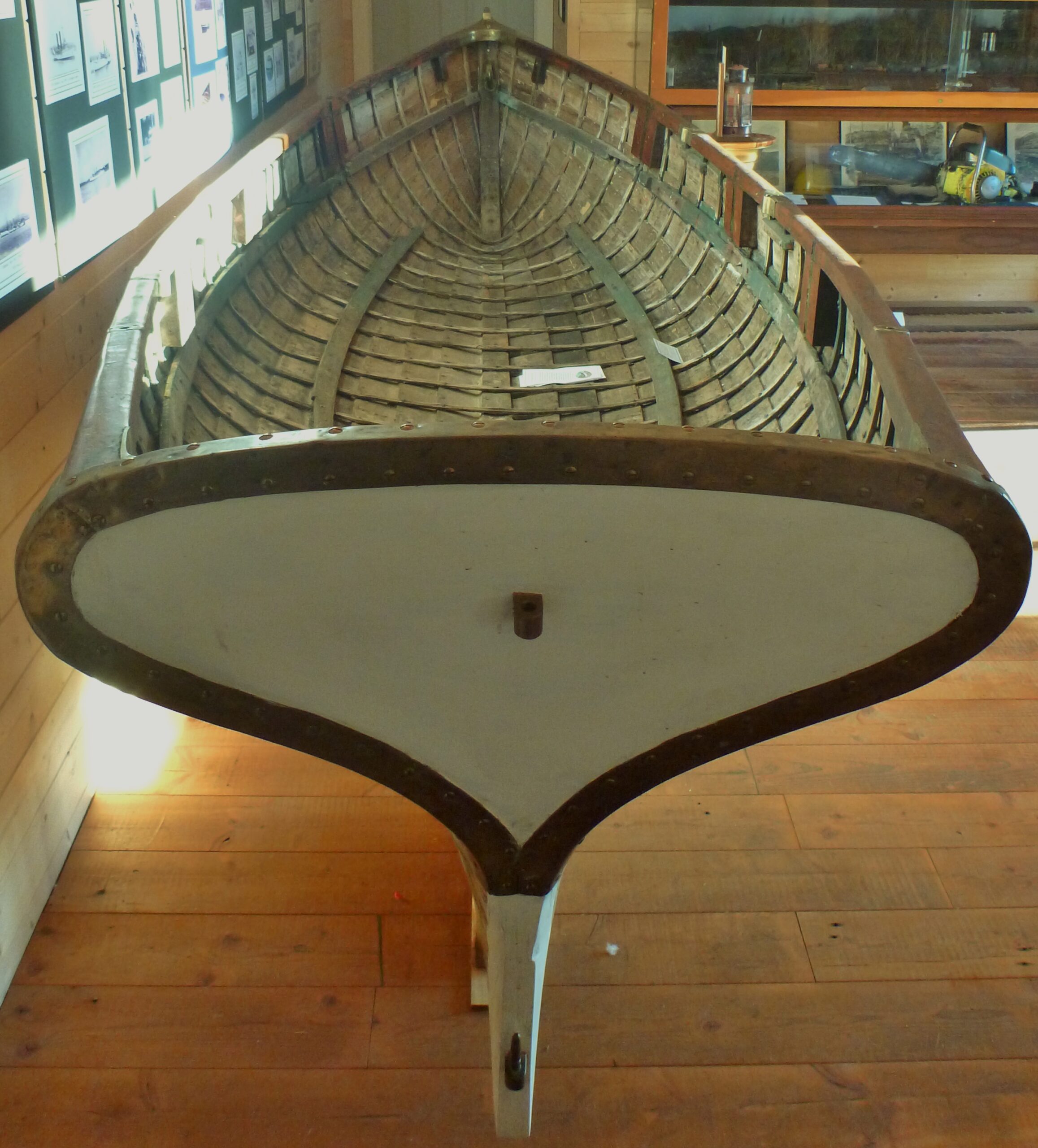 The Rainbow Skiff Dinghy is one of the last surviving skiff dinghies used by the British Admiralty in the late 1800s. Belonging to the HMC Rainbow that patrolled the coast, the skiff dinghy features fine workmanship belonging to a the Victorian era where great attention was paid to details. Ladysmith Maritime Society member and historian Robert Lawson walks us through his extensive research on the Rainbow and shares some stories and photos from his collection. The "Rainbow Skiff Dinghy" is the featured display at the Ladysmith Community Marina's floating museum.

Special thanks to Robert Lawson for narration and sharing his stories.

The Marilyn is a classic-built flat bottomed skiff that typically would be found on commercial vessels before WWII. Built by Duncan based shipwright Robert Lally in 1980, the skiff has been restored and is the tender for the historic Saravan, the flag ship of the Ladysmith Maritime Society's heritage boat fleet. Ladysmith Maritime Society members Robert Lawson and Rod McNeil share their stories about the Marilyn and boats like her. 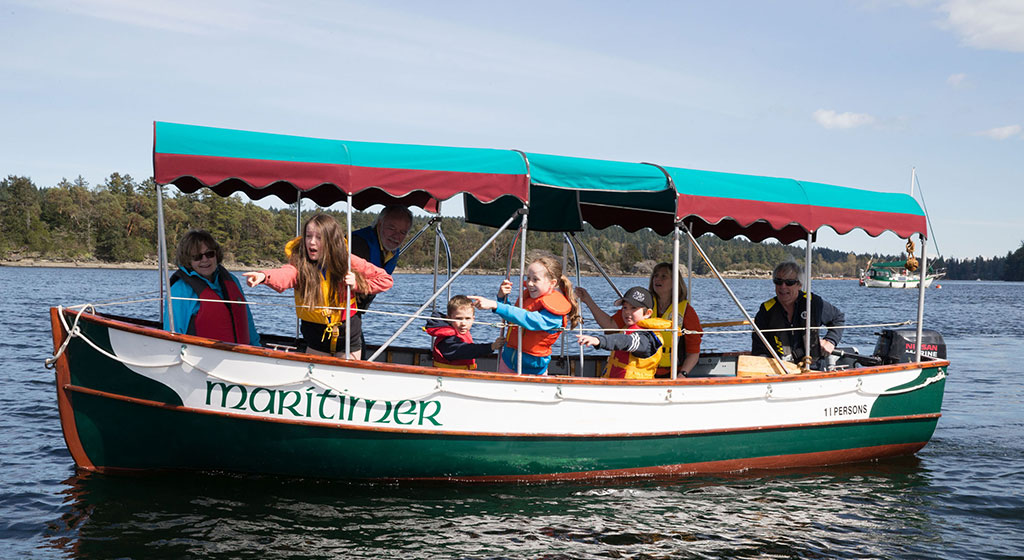 The Maritimer is a well-known and beloved tour boat as it plies the waters of Ladysmith Harbour while LMS volunteer operators point out the attractions and share some history. This former Davidson lifeboat started its life working for BC Ferries but now brings shrieks of delights from its guests, young and old alike.
The Maritimer operator and Ladysmith Maritime Society member Rob Pinkerton, and Robert Lawson share some of the stories as we join Captain Dan Lutz onboard.
Special thanks to Rob Pinkerton and Robert Lawson for sharing their stories, and Capt. Dan for a great tour!

The Northern Light is a 50' classic Monk, built in 1967. It worked the coast for years as a Mission Boat owned by the Seven Day Adventists. Ladysmith Maritime Society director and owner of the Northern Light Art Rendell gives us a tour and shares some stories as he chronicles some of the boat's unique features and some of the restoration work completed. Built by Vancouver's Matsumoto Shipyards, the Northern Light combines wood with aluminum, and is an early example of use in aluminum in the ship industry.
Special thanks to Art Rendell for sharing his photo collection and stories. 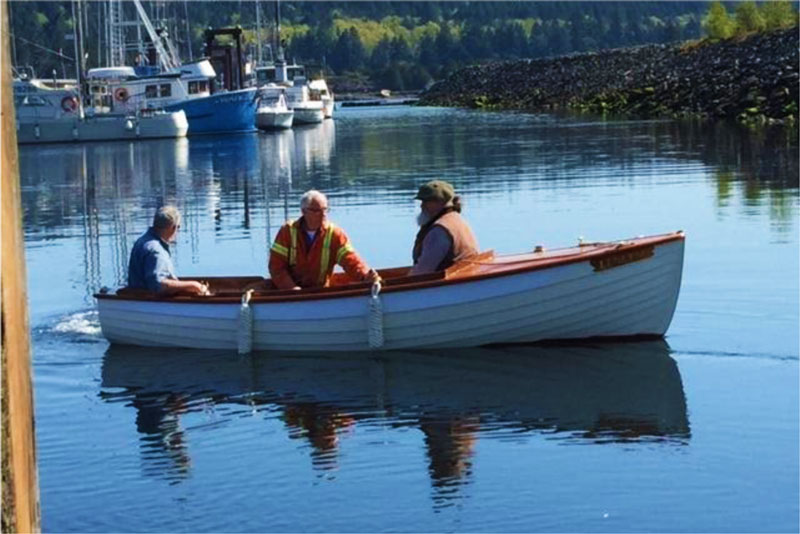 The Lesley is a Spencer craft, built in the late 1940’s with cedar planks on oak ribs, with a length of 14’ and beam of 5’6”. She was acquired by Barney and Lesley Durban in 1965. Barney was an avid fisherman who used the boat locally and rarely came home empty handed. The boat was later owned by Michael and Judy Durban and restored to her former beauty in 1991 by Michael, when she returned to the fishing ground for a final farewell to Barney. The Lesley was donated to LMS in 2007 by the Durban family with the understanding that it would be restored.
In 2014 LMS honored their commitment to Lesley Durban and started work on it. A used engine and steering wheel were donated and a stock of Sapele was purchased to make the new side decks, rub rails and the seats. The boat was repainted and varnished, and bronze fittings were acquired for oar locks.

Special thanks to Michael Durban, Robert Lawson, and Bob Hogberg for sharing their stories.